OK EDLX-er’s, you know the drill by now. April is double birthday time — for us and the whole of Holland. On Saturday the 26th it’s Kings Day, meaning 24 hours of parties and more. But there’s just one you need to concern yourself with come nightfall and that’s our sixth anniversary take-over at Maasilo, Rotterdam. Last year we shared the reins with local promoters Nachtduik to deliver a 40-name strong total blow-out. This year we’re going for less is more, calling on some of the finest names in techno today to help our chief toast another year.

First up is someone who needs little introduction by now: the Berghain resident who never ceases to entertain, Ben Klock. There really is nothing quite like a session from this Berlin institution. He’s joined by one of the UK’s industrial revolutionists, Blawan. This hardworking Brit has continued to impress both on and off the decks with his slew of heavy-hitting productions solo and in more analogue-based forays as Karenn with partner Pariah. Stepping out as Trade last year with Surgeon was the proverbial icing on the cake. We are especially excited to welcome back Blawan to the EDP fold.

DVS1 is another in need of few words. Emphatic collector, encyclopaedic knowledge and an enthusiastic flair makes his name on any line up an instant gratification. Back to Berlin, 2013 was an exceptional time for Rodhad. It was the year Dystopian co-founder emerged from the shadows and assert his heady, slow-burn style on the rest of the world. One of 2013’s most promising upstarts, and a real treat behind the decks. Like Rodhad, Subjected has been building up a loyal fan base by clandestine means. Distinct and unique, his Vault Series vehicle is deeply respected amongst underground tiers. In October he joined the EDLX roster with ‘Foreign Awake’ — the first of two EP’s produced with Vault partner Sawlin. He’s our honorary family member tonight, and what a fantastic addition to the line up.

Last, but by no means least, Rotterdam stalwarts Serg and Gerd complete the bill. These two esteemed label heads — from Clone and Fortek, of course — will be going in back to back, with Speedy J taking the night to its inevitable conclusion. All this in one of the most exciting venues Rotterdam has to offer. What more could you possibly want? See you on the floor party people! 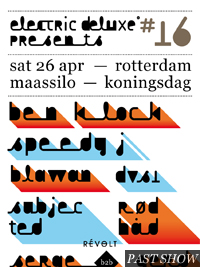 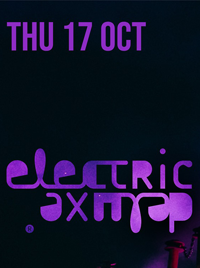 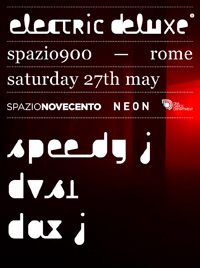 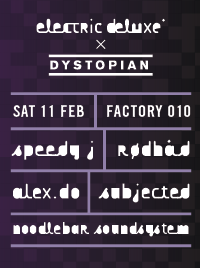